So it has been an exciting weekend for me. It all began this weekend with a ghost walk in an old Napoleonic fort nearby.

Suffice to say that I am no more convinced of the existence of the supernatural than I was before. Our trip began with the tour we had booked on in advance being cancelled, a trip to a takeaway to kill time (which culminated at us being stood at their counter for 5 minutes with money in our hands, while they preferred to talk on the phone than serve us) and the absolute crappiest of possible weather.

The ghost walk was led by a rather elderly gentleman who, bless him, did his best. However the fact that he constantly mixed up “lass” and “lad”, that he constantly lost his train of thought and speech, and the general lack of ambience meant that generally, the whole walk was not scary. I am naturally sceptical, and to believe that there was a ghost in every single room and corridor we passed through was a bit of a stretch. The day was a bit of a wash-out but we did have a laugh giggling at the ridiculous stories and their characters with interchangeable genders.

Saturday I mainly sat around.

This morning was the 10km run I have been leading up to over the last few months. I awoke bright and early at 8am to get some breakfast inside me and digested before the run took place. I had a lovely shower and lounged around before making my way across the road to take part.

Unfortunately on arrival I discovered that, true to form, I actually got the time wrong. So.. It turns out I arrived 15 minutes after the runners had actually left. Cue what was a desperate and futile attempt to er.. not come last. Which I promptly did.

However, I did run the race faster than I had anticipated. I don’t have an accurate time, as well, they declared my starting time the same as everyone else, and my stupid Garmin Forerunner didn’t find a satellite lock until half a mile into the race. My reported time was 1 hour 15 mins. Which means that I must have come in just under or pretty much bang on an hour. Which to be honest I am totally chuffed with.

So anyway my legs are sore. My calves are stiff and doing a great job of cramping whenever they are stretched. Still, it is done and I have a trophy to remind me of my finishing! 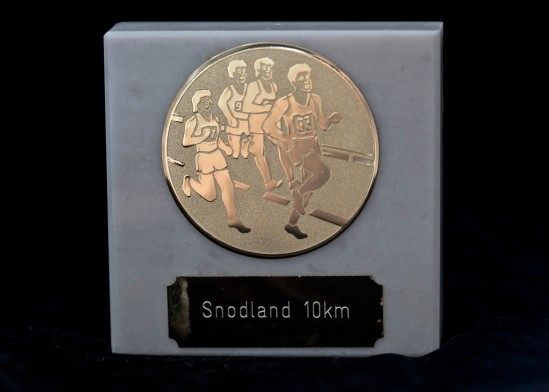 And some suitable Soilwork to end.